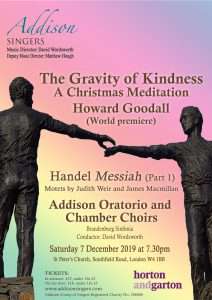 ‘The Gravity of Kindness’

The Addison Singers are proud to present a brand new composition by the ever popular and hugely talented Howard Goodall: ‘The Gravity of Kindness’ – a Christmas Meditation for soprano, chorus & chamber orchestra. Commissioned by the Addison Singers in memory of Cathy Bereznicki and thanks to her generous bequest, this 15 minute piece is a beautiful and moving gem inspired by three pieces of text: the poem ‘Kindness’ by Naomi Shihab Nye, the ‘Coventry Carol’, and a traditional Mexican lullaby.

Alongside the new piece the Oratorio Choir sing Part 1 of ‘Messiah’ in addition to the ever popular ‘Hallelujah Chorus’, whilst the Chamber Choir perform more recent seasonal music by Huw Watkins, James Macmillan and Judith Weir.

Read more about ‘The Gravity of Kindness’  ….

December 7th 2019 sees the premiere of the third, final and largest of the recent commissions undertaken by the Addison Singers, in memory of Cathy Bereznicki. Having worked with Howard Goodall several times and the Addison Singers having sung and very much enjoyed a number of Howard’s pieces, it was with some trepidation that I approached him about the possibility of writing a new piece for us. Trepidation not because Howard is in anyway grand or distant, far from it, and his support for amateur choirs is well known, but because I was doubtful that such a busy composer would have time the time to consider anything other than perhaps a short Christmas Carol, if that. However, once we started talking about what kind of piece Howard might write and I dropped in a suggestion that he might like to consider a Christmas piece, a shorter companion work to his hugely successful Requiem, ‘Eternal Light’ (which has now had well over 500 performances all over the world), things seemed to lock into place.

As is often the case, with new commissions, it is important to give a composer a little guidance as to what one might be looking for in terms of duration, subject matter, perhaps one or two soloists and very importantly, the piece must be on the one hand challenging and interesting enough to keep a choir engaged, but possible to put together in the time available and accompanied by not a huge orchestra, so that lots of other performances will follow. With a composer as practical as Howard, his long experience not only with choirs, but in the world of films and television too, were time is of the essence, I never thought this would be a problem and in fact the face to face meetings and the email trail, reveal the most relaxed of exchanges! In the end we agreed on a soprano soloist and an orchestra consisting of trumpet, harp and strings – thus making the piece easy to programme alongside other seasonal music.

For his text, Howard chose part of the well-known 16th century ‘Coventry Carol’ (Lully, lullay, thou little tiny child’) and a traditional Mexican lullaby, ‘Arroro mi Niño’. Enclosed and running alongside those two texts and most importantly, is a beautiful poem by the Palestinian/American writer Naomi Shihab Nye. ‘Kindness’ was written after a particularly traumatic event in her own life, but seems to be astonishingly fitting and relevant, as we look around the fractured world we live in and in a new and contemporary way, passes on the traditional Christmas message of ‘Goodwill to all men’.

The poem and indeed the piece ends in quiet optimism –

‘…. only kindness raises its head from the crowd of the world to say “It is I you have been looking for, and then goes with you everywhere like a shadow or a friend” ‘