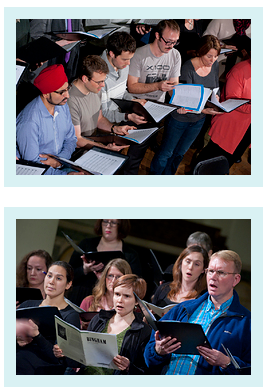 The Addison Chamber Choir is an auditioned choir of between 30-40 voices who sing a large repertoire but have become particularly known for the performance of music by a wide range of contemporary composers, many of whom have written pieces especially for the choir.
Most recently the choir performed at the Americana Festival at St John’s Smith Square and ‘Parry and Beyond’ at St Paul’s Covent Garden. The choir regularly sings at St Martin’s in the Fields as part of the Brandenburg Festival, King's Place and venues across London. In July 2018 the choir went on tour to Isle of Man and performed a range of contemporary works with local choirs.
Addison Chamber Choir frequently joins concerts given by the Addison Oratorio Choir, often having their own performing spot and making a pleasing contrast to the larger scale works sung by the bigger choir. A high level of commitment and rehearsal attendance and practice at home is expected.

Auditions for AUTUMN 2022 will be held at the start of term. Please contact the Membership Coordinator (addisonadmin@gmail.com) in advance to indicate interest.

Auditions are necessary for entry to the two smaller Addison Singers groups, the Jazz Ensemble and the Chamber Choir, in order to achieve a good blend and balance of voices, and to ensure that singers have the musicianship and sight-reading skills to be able to perform the chosen repertoire to a high standard.

Auditions for the Chamber Choir are usually held at the beginning of each term. Please contact the Membership Coordinator (addisonadmin@gmail.com) to indicate interest. Successful applicants are asked to commit themselves for a minimum of a term to include the concert or ideally for longer and to participate in at least 75% of the rehearsals.

When to apply  To apply to audition for the Chamber Choir, please fill in the online form. Auditions are held at the beginning of each term. The exact date for the start of each term will be given on our dates page.

Format of audition  Your audition will be with the Music Director with an accompanist and should take no more than about 10 minutes and will include: - a few vocal exercises - some sight reading - performance of a piece you have prepared.

How to apply  If you would like to have an audition, please fill in the online form or if you have any queries, contact our Membership Coordinator, or ansaphone 07531 447960. She will be able to help with further information and arrange a time for you to attend an audition prior to rehearsals starting.

If you are interested in joining the Chamber Choir please read the information about auditions.

NEW MEMBERS: If you have completed a successful audition, please enrol online at the start of term by first registering (click on Register in the top menu bar and fill in the form with your details, choose a password). You can then login as a member (click on Members in the top menu bar) by entering your email and password.

Once logged in the Members section, you can purchase a Chamber Choir membership (click on Purchase your memberships), go through Checkout, choose a payment method and confirm. You will receive an email confirmation.

Please contact us to ask about enrolling after term has started.

EXISTING MEMBERS: To enrol you need to first access the Members section - click on Members in the top menu bar, then log in with your email address and/or reset your password. Choose your membership(s), go through Checkout, select a payment method and confirm. You will receive an email confirmation.

Taster Session
Any potential new member to one of the auditioned choirs will be invited to do their audition and then, if successful, will be invited to stay for that evening's rehearsal. At the end of which you will be asked to complete the enrolment online and make the appropriate payment.

Multichoir discount (not applicable to classes)
If you wish to join more than one choir, the following discounts will be applied directly in your shopping basket:
Join any 2 choirs = £130 (£65/choir)
Join any 3 choirs = £180 (£60/choir)
Join any 4 choirs = £220 (£55/choir)
Concessions
We do not offer concessionary rates currently but if you are on a low income and would like to request a discount, please apply to the Chair of The Addison Group of Singers directly (chairaddison@gmail.com) or via the membership Coordinator (addisonadmin@gmail.com). All requests are confidential.

Payment methods
You can pay by:

Refunds
If a choir rehearsal has to be cancelled, for example, due to bad weather conditions, refunds will not be given, as we will try to arrange an alternative date. If a class has to be cancelled and cannot be rearranged, the fee will be refunded based on the number of cancelled sessions.

If a member does not take up a place or complete a term for any reason (other than the above) there is no entitlement to a refund. You can however opt to transfer your fee to the following term, but we do ask you to return the current term's music before this is confirmed. If you wish to transfer to another choir or class you need to consult our Membership Coordinator, and any difference in the fee or subscription must be paid or be refunded. If you require a receipt for your postal enrolment, you will need to enclose a stamped self-addressed envelope.

Gift Aid
If you are a taxpayer, current legislation allows us to reclaim basic rate income tax on your membership subscriptions (however not on CDs, class fees or tuition elements). When enrolling online, please read the Gift Aid information and tick the box if you are happy for us to do this. Remember to notify us if you no longer pay an amount of income tax and/or capital gains tax equal to the tax we can reclaim on your donations.

Members website
Once you have enrolled in a choir or class, you will be eligible to access the Members' area on the AS website and added to the mailing list to receive e-mail information about choir activities, social and other events. An online resource only, you can access information sheets, publicity posters, the Newsletters, photos of concerts, additional trips and social events. This helps us reduce postal costs and speeds up communication about choir events. The Membership Coordinator will send you an email with an invitation to join and give you a pre-selected password that you can change to a more memorable version once you are logged in.

Problems displaying the correct information on the page?
If you find that the information you need is not displayed correctly on the page, your browser window may be "remembering" the old page, and needs refreshing. Windows users: please hold down the Ctrl key (bottom left corner of your keyboard) and press the F5 key (along the top). Mac users: hold down the Command key ("cloverleaf", bottom left) and press R.